We seldom call him Spike. Instead he is known as Boy Boy. My handsome boy.


We all have a fetish for hamster butts. =D
Posted by kisetsu at 1:00 AM No comments:

Boy Boy is relatively a very easy hamster to take care off. He is a home boy, doesn't like to come outside his cage (and will have a panic attack after 5 mins out of his house), doesn't like to be disturbed or play with, doesn't bother anyone unless he is hungry or food time.

A 6 weeks old baby female ham ham came to our Hamsty household on 22 Jan 17. Still very shy (or sulky I would say). Girl Girl sensed a newcomer and was curious. However, GG had her own ordeal to deal with (housekeeping on her cage which she never likes), so she forgotten it all and sulked at one corner of her cage when we finished housekeeping. Boy Boy? As usual, his 'bochup' attitude...


When I hold GG in my hand, I realised that she is not such a small size hammie now, as compared to Frappe's size. =D

Each hamster is different. They have different personalities, characters, and even behaviour. With so many hamsters we had in the past decade, we came nothing across like Almond. So much so that co-owner branded her as The Gold Standards hamster. A hamster that surpassed all expectations. 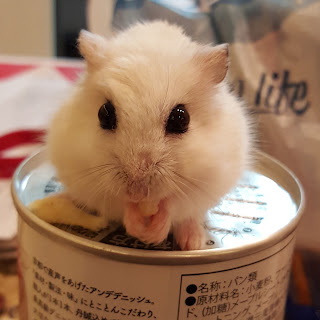 A hamster that was:
She loved to play hide-&-seek under the duvet and a little peekaboo with us. Very well-nature and obedient I would say so. She would become the favourite hamster of co-owner (favouritism)

When you are trying to get work done but your attention-seeking hammie wants to meddle into things as well.

Hamsty World has been hibernating for the past 4-5 years. It's time to relaunch and document the hammies who have been missed out over the years.


However,in the meantime, there is alot of clearing up to do. Work in progress and the blog will start rolling out soon.

Wow, it's a life-saver skills for the hamsters. They look so cute when they are paddling. =D

Just hope the owner rescue the one that gave up in time. The little one looks like about to drown.

SE is one noisy hamster. She likes to squeak a lot. We find her the most communicative hamster we ever had. She will softly squeaks when she is in our hands, when she's upset, when she's complaining. She also hiccups and probably coughs. Co-owner says she is asthmatic. Lol.

Here she is, probably hiccupping again.

Sloth was back to stay with us for two weeks. Prior to that, we sent SE packing to Sloth's house. I think SE quite enjoy the company of another hamster. So when Sloth and SE came to our place, I could see SE was quite happy (afterall, she could eat the same food as Sloth did because of Sloth's owner's generosity). Sloth on the other hand was scared stiff. But luckily a few days later, she warmed up to us. 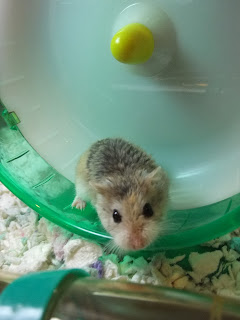 Sloth is one luxury ham. She loves a variety of food and she doesn't really eat the same type of food daily. So we kept changing the menu of snacks everyday for her to eat complete the whole piece. She ate edamame, pine nuts, milk bread, cheese and biscuits. I bet SE was thinking: "If you don't like flax seeds, hand them over to me instead." 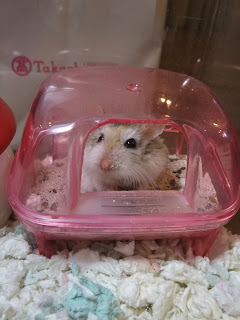 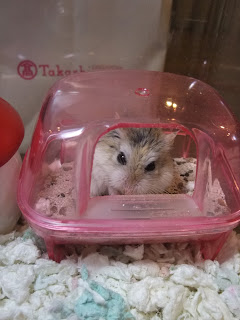 We could see SE was a little sad to see Sloth gone home. Upon leaving, the anti-social Short Ear climbed up her cage with her head popping out as if to say: "Hey, take me with you!" 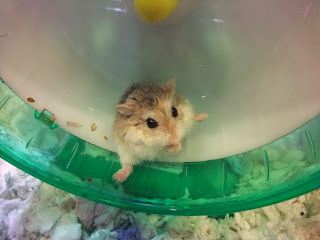 Wonder if Sloth is coming again for another vacation. =D
Posted by kisetsu at 12:08 PM 8 comments: 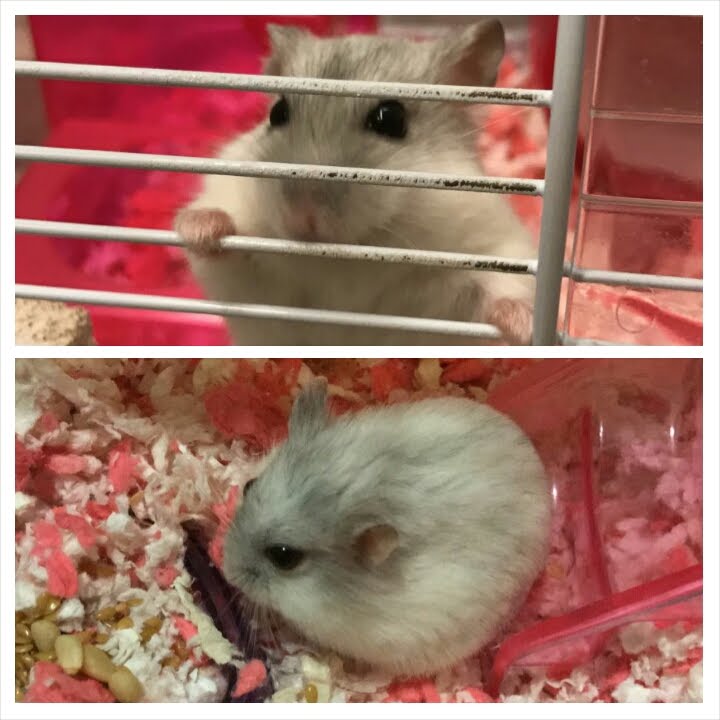 Hamster of the Month